Take a straw poll around your office, your family, your circle of friends. Ask them where their ideal holiday destination would be.  I'm betting that the majority of answers would centre around the luxurious - white Caribbean beaches, maybe a stay on an Indian Ocean island; spa resorts - rest and relaxation.

While all of that sounds attractive, for some reason (and I really don't understand this) I have always been strongly attracted to travel a bit further afield - just about as off the beaten track as the average Westerner gets without rowing the length of the Amazon.  If there were no obstacles, the place I would visit in a heartbeat is Tibet.

Ideally, I'd get there by flying to Moscow and then taking the Trans-Siberian Railway as far as Beijing (an adventure in itself!)  From there, it is possible to take another train south to Lhasa.  Rather than a hotel (and I omitted the word 'luxury' there deliberately does such a thing exist in Tibet?) I would like to stay with a Tibetan Nomad family - sleep in their tents, experience their lifestyle before they are all forced into towns and cities by the effects of global warming. 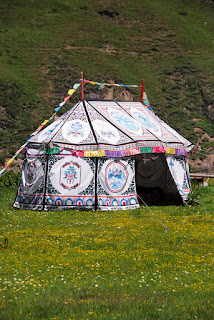 I totally accept that I probably have a romanticised view of this whole experience.  Quite possibly I've watched one too many David Attenborough documentaries!  Nevertheless, the 'roof of the world' and the incredible sight of all those prayer flags fluttering in the wind against a backdrop of snow-capped mountains and bright sunshine, stirs something in me. 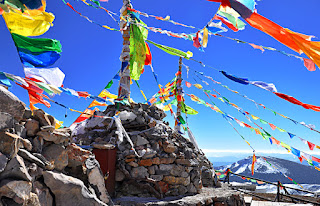 So how to do this on a budget?

Money Supermarket is running a competition - neatly entitled A Grand Adventure - www.moneysupermarket.com/a-grand-adventure which asks that you choose your ideal destination and then say how you would survive on £1000 excluding travel.  For me - fairly simple.  The life of a Tibetan Nomad cannot be particularly expensive.  I'm not envisaging much layout on Yaks or any other kind of quadruped.  I'm kind of hoping that the arrival of a blue-eyed redhead in their midst might cause enough interest for the Tibetans  to offer me shelter in one of their Yurts for the duration of my visit and maybe I could trade free English lessons for being allowed to share their lives for a very short time?  How would we communicate?  I've no idea but I imagine we could find something to yak about.  (sorry - that was truly appalling...)

As for the food, well.....  Let's just say that the prospect of tea containing salt and with a good dollop of dri* butter in it doesn't fill me with happy anticipation any more than the prospect of raw or dried Yak meat or Tsamba which is ground Barley flour to which salty butter tea is added.  This is a staple of most Tibetans' diets. All of which put together means hardly any outlay of cash and loads of weight lost.

It's win-win.  Who needs an expensive spa?!