And the goose may well be getting fat but not round these parts.  I'm currently in denial, having done NOTHING about Christmas yet.  I had intended to get up early on Sunday and shoot off to John Lewis but it seemed pointless when no bugger has given me a Christmas list so I have no idea what to buy.

On Skype the other night, the Shah informed me that he wanted a Boxing Game for the X-Box (I tell you, he's regressing).  But, I told him, the X-Box belongs to son who is skint having spent 99.9% of his money on Hockey and Lager and wild wild women (this is no exaggeration, I promise).  He is planning to sell it to fund more Lager and more women and possibly skim off a few meagre groats with which to purchase minuscule Christmas presents for his ailing parents and arsey sister.

"Fukkit" roars the Shah.  "Now I'll have to buy the X-Box off him as well".
It's astonishing really that someone who is so financially acute, who works in the big, bad world of banks, cannot recognise a false economy when it rears up and bites him on the jacksy.

I am not a great fan of Christmas.  It strikes me as a load of hard work for very little return and I have previously mentioned the crap presents the Shah has bought for me in the past.

However, son and I were reminiscing about Christmases past on a car journey recently and ended up weeping with hysterical laughter when we recalled his father's adventures one year.

When the children were smaller, they attended a lovely little school run by a kind, caring and deeply religious headmaster.  Christmas was a big deal at this school and the Christmas Fair was hotly anticipated every year.  The parents were a supportive lot and many mums and dads helped out in various roles.  One year the Shah, experiencing an unaccustomed burst of initiative, decided to throw himself into the festivities.

He wasn't to be dissuaded and nobody else seemed to have a problem with it, so the whole horrible shebang went ahead.  It was decided that the Shah and another dad - coincidentally a friend and partner in crime of the Shah  - would share the onerous task.  A small "grotto" (more grotty than grotto) was curtained off, costumes were hired and a couple of very unwilling Year 6 boys were press-ganged into being Santa's Elves.  The Shah took the first shift.  Two small children went in hand in hand.  They came out a little while later looking a little shell-shocked and tearful but clutching a gift each.  A queue was building.  I stuck my head through the curtain to ask the Shah Santa to shift his butt as the natives were getting restless.

"Okay" sez the Shah.  "I suppose I could not tell them to give me a hug at the end?"
"YOU WHAT?" I screamed as quietly as I could.  "DON'T START HUGGING THEM FOR FECK'S SAKE - YOU'LL BE HAD UP AS SOME SORT OF KIDDY FIDDLER!"

And he continued and everyone hugged him and guess what?  Yep - nothing.  Common sense reigned.

About an hour in, two small boys emerged, one clutching a water bottle.  "Erm, Santa says please could he have some water cos he's very hot in there?" they said in their little piping voices.  I took the water in.  The Shah was indeed very hot, so much so that he had turned a strange Mahogany colour and, always inclined towards hydrosis, was dripping unattractively with sweat.

Enter the Headmaster.  "How's it going in there, Santa?" he asked jovially.
"Fine, fine," lied the Shah with great ease.  "I'm hoping Jim will be along in a minute to take over."

Enter Jim.  "Oi veh!" he quips, "Mazeltov Shah!" (Jim liked to camp it up at every opportunity). It was at this point that a slow dawning could be seen on the face of the lovely, kind, Christian Headmaster. 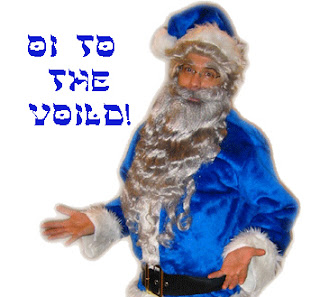 Somehow he had ended up with one Hindu Santa and one Jewish one.

Shortly afterwards, he was seen winning a bottle of Scotch on the Tombola.  He'd been teetotal up to that point...
Posted by Curry Queen at 18:55 14 comments:

Email ThisBlogThis!Share to TwitterShare to FacebookShare to Pinterest
Labels: Christmas

If someone said to you, "give me £50 and I'll give you a great day out, let you see and hear many expert, inspirational people in the flesh, feed you gorgeous fodder and then ply you with Prosecco at the end" would you cough up?

Well I did.  And it was one of the best £50 I've ever spent.  Mumsnet Blogfest happened on Saturday and kicked off with the refreshingly normal (and irritatingly beautiful) Miriam Gonzalez Durantez or - for the politically illiterate - Mrs Nick Clegg.  She spoke at length in her endearing Spanish lilt about being a mother - the trials and tribulations and admitted that she often used Mumsnet for some "teeps" for staying sane.


Breakout sessions with the likes of Tanya Byron (full of good sense, obviously brilliantly clever but I wouldn't want to meet her down a dark alley), Cath Elliott, journalists Eleanor Mills, Suzanne Moore and Liz Fraser tackled the issue of trolls.  Other sessions covered 'Finding your Voice' with the unexpectedly hilarious Zoe Williams amongst others, SEO techniques, Social Media, Photography and more.
Then came a Keynote Panel featuring the much-anticipated Liz Jones of the Daily Mail.  To say she was a damp squib would be a massive understatement.  She is deaf on one side but chose not to sit on the correct side of the Chair so she couldn't hear anything.  This is the woman who reacted to the news of her husband's infidelity by thinking "oh good, I can get a couple of columns out of this" although, on Saturday, she claimed to regret ever having spilled the beans on friends and family because now she has "no relationships".  She followed up her unsmiling appearance (she might have tried once or twice but I think her face was too tight) with a typically snarky article in the Mail on Sunday the following day, littered with inaccuracies and fallacies. There was something familiar about her appearance too - the heavy eye makeup, the orange tan....

Ironically, the closing keynote speaker was the delightful Caitlin Moran who was hilarious to listen to and forecast that the future of journalism would see the end of snarkiness, so maybe someone should tell Liz.  She responded to one star-struck questioner (who came over all giggly like a 10 year old girl) with "would you like to have sex with me?  I accept!"  She was the perfect choice to end the day. Then it was upstairs for a few buckets of Prosecco before staggering off in search of a taxi, weighed down by a very generous goody bag.  Well done Mumsnet.  Sign me up for next year, but maybe we could avoid that thing  with Mrs Jones...?

The Shah is on Skype.  ‘Hahaha’ he chortles, ‘I read your blog – very funny but not quite accurate.’

‘I haven’t got 142 episodes of The Big Bang Theory to watch.’

That’s GROSS! I reply smartly, but he chooses to ignore my rapier wit.

So here we are with episode two, carrying on from the chaos of half term with a bit more news – some old and some new:-

And finally...last night the bloody cat brought a mouse into the bedroom and started playing with it enthusiastically.  I lost my rag and looked around for something to lob at him.  Luckily, I had not taken the Vanish stain remover downstairs and the lid proved to be a useful weapon.  He vanished (haha) and I finally got to sleep.  This morning, I was up early and stumbled along the landing in bare feet.  You’d think I might have learned by now, wouldn’t you?  Yes.  I stepped straight into the disgusting little pile of mouse guts, lovingly left at the top of the stairs.

And that just goes to prove that there is more than one type of gross.

Something's got to give...

Okay - this is the deal.  If you have no wish to read a litany of self-serving, self-pitying bleating and whining, leave this blog NOW.  Move away from the blog...that's it sir, madam - BACK AWAY FROM THE BLOG...

Half term "holiday" - what type of fucking misnomer-joke is that?  My half term has so far comprised:
Sorry.  Quite out of breath now.  Need to go and lie down in a darkened room with a quart of Gin.  And the cat.  No, not the cat.  This is what he left me one morning recently right beside the bed...
Naturally, this was before the Shah arrived home, so I was forced to deal with it despite it being a blue job par excellence.  Note the lifelike pose of Rattus. This freaked me right out because someone once told me that Rats can freeze and mimic death to put off their attackers.  I was convinced it would spring to life as soon as I went near it.  The daughter crouched on my bed squealing as I grabbed its tail (using some loo roll, natch) and threw it out of the window over the fence.  Or so I thought. Two days later, I noticed it hanging in a bush.  One day after that, It fell out of the bush and lay in its delightful rigor in the front garden.  The Shah was despatched to deal with it pronto.  He had to fend off the ASBO cat who was attempting to snack on the yummy remains. Hmmm...delish!

And on top of all this, I try and fit in a full time job.