This post started out with a title of 'Man Flu' (you can guess whose) but I feel that the Shah has been the focus of too many rants of late - however well deserved - to the point that he is almost deliberately generating irritants in order to be written about (well that's my theory and I'm sticking to it).

Half term is my week for 'doing life' by which I mean seeing my mum for a decent day out rather than just the usual Saturday rush round the supermarket, paying bills, having some time to myself, getting my hair done etc.  Ah yes - getting my hair done.  I have had the same hairdresser for over 20 years now.  We were next door neighbours all those years ago and, while we lived close, she would come to our house to do us all.  Now that we have moved further away, I go to where she works in a tiny salon with just two others.

This lot are old friends who have worked together on an off for around 30 years.  It's the most wonderful, eccentric place and most of the customers seem to go for the entertainment as much as the haircut. Recently, I found myself sitting beside someone who used to work for Sharon Osbourne and who was full of interesting stories.  There is a salon dog, a miniature daschund called Tatiana - or Tattie to her friends.  Yesterday I was her friend and she demanded to sit on my lap where she dozed happily until it was time for me to move.
It's so relaxing - you can chat, have a coffee, read the latest magazines and generally escape for a couple of hours.  You even get time to abuse engage in learned discourse with your absent daughter who is lying abed at a friend's house, recovering from something called 'Monday Night Guildford' (ie an excuse for a large night out). 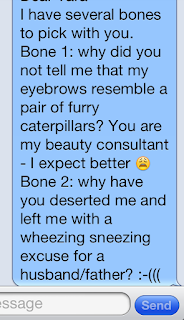 Her response told me that I was not being taken entirely seriously:- 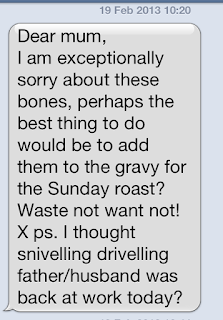 Clearly her afflicted father was not being taken too seriously either.

My hairdresser and I were both suffering from Man Flu - i.e. our respective husbands were causing us to suffer via their "illnesses". Such a relief to know that someone else is losing patience with the overwhelming stench of burning martyr, the drooping shoulders and the wheezy insistence that "no, I'b fide, really" *snort, sniff, cough, sigh*

It got to the point where I posted the following on Facebook:-

Advice needed. At what stage of man flu is it morally, ethically and/or socially acceptable to do away with your husband? One more groan or sniff or sigh AND I SWEAR I WILL LOSE IT

Strangely, the only male who responded was one of my cousins who claimed (silly boy) that while the odd moan or sniff or sign might inadvertently slip out, we women have no idea of men's suffering because they hide it so well. The rest of the comments came from women who were unanimous in shouting "off with his head" or similar. Nice to know there is still solidarity!
Posted by Curry Queen at 12:22 14 comments: Links to this post

In the light of a new study from the Harvard School of Public Health that has found that watching too much TV can reduce fertility in young men, I breezily inform the Shah that I am amazed we ever managed to procreate at all.

"Whaddya mean by that?" he snorts, fumbling for the remote that seems somehow to have got itself stuck down his trousers.

"I mean, it's a wonder you're not a Jaffa* given the amount of time you spend glued to that thing" I reply.

"Nonsense.  But while we're on the subject of the telly..."

Too late, I realise I have played right into his hands as he uses the opportunity to pitch for a new TV in the family room.  Although I sigh and pull faces, I'm quite pleased because the old one is ginormous and takes up half the room.  Viz:- 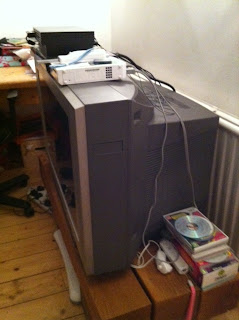 It was one of the first ever flat screen TVs but, as you can see, they hadn't quite got the hang of slimline technology all those years ago.  It also weighs 14 stone.  Yes, really.  That's 90kg or 196lbs for my non-British chums.

"Sooo," wheedles the Shah, "you know how we have to go to John Lewis on Saturday to pay for the new carpets?  We could have a look for a new TV at the same time!"  And he flops back onto the sofa, exhilarated by this grand idea but also exhausted by the effort of paying me this much attention.

However, there is (naturally) a fly in the ointment and, by Saturday, I had been struck down by the virus from hell and was feeling really, really awful.  However, carpets have to be paid for because John Lewis won't lay then without payment up front, cos they're funny like that. So I wearily trailed along with his nibs who was uncommonly chipper, considering we were going shopping - an activity that normally brings him out in hives.

Unfortunately, the person who served us in the flooring department was new and felt it safest to check every last full stop on the order before he could consider relieving me of my credit card to pay.  By this stage, I could have cheerfully lain down on a nearby pile of tufted samples and wept but I gritted my teeth and soldiered on, shivering. The Shah sat back happily in one of their thoughtfully-provided armchairs and eyed my flushed cheeks and glazed expression.

"Do you know what?" he asked
"Um, no," I mumbled, thinking "he's going to say 'let's not bother with the tv, you look terrible, I'm going to take you straight home and tuck you up with some Night Nurse and a hot water bottle'..."  He smiled slightly and leaned forward.

"I was thinking about my Pension the other day."

Inwardly, I am now screaming WHAT THE ACTUAL FUCK IS WRONG WITH YOU? But I have no energy to form the words, so I make some vague noises and try to smile.

Eventually, the transaction is complete and we trail to the Electrical Department.  This is the equivalent of Shah Heaven.   He could (and did) spend hour on fecking hour gazing at all the screens on offer, waxing lyrical about the relative merits of HD over 3D (like I care).  Unfortunately again, the person the Shah chose to serve us this time was about as technologically boring inclined as he, so they went off on a little tangent wittering on to each other about internet connections and wireless keyboards.

Death would have been sweet release.

E-v-e-n-t-u-a-l-l-y the deed is struck, the Shah has snatched the bargain of the century from under the nose of some other unlucky sod and delivery has been arranged.

We arrive home to find our (17 and 20 year old) children engaged in a game that was a favourite when they were kiddies.  It's called 'Hub bub bub' and involves one person grabbing any excess flesh around the middle of the other and squeezing it to tickle them, all the time shrieking (you'll never guess) "Hub bub bub".  Of course, these days, they are far too big and strong and, sure enough, one was too rough and hurt the other one and the whole thing disintegrated into a cacophony of punching and name-calling.

The Shah eyed the brawl being enacted on the kitchen floor as he stepped over the tangle of arms and legs.

"What was that you were saying about being a Jaffa?" he asked with a certain wistfulness.

*Jaffa - a coarse term to indicate that someone is infertile - i.e. seedless.
Posted by Curry Queen at 17:33 19 comments: Links to this post