Well done Wayne!  Your pathetic posturing and pouting stroppiness has, at last, resulted in Manchester United selling its soul to your agent and doubling your (already obscene) salary.
I’m just wondering how on earth you go about spending £50,000,000 over 5 years?  Given that he’s already said to have a net worth of £33 million, don’t forget.  And that’s not counting Coleen’s earnings which seem to emanate from being the, er, wife of a footballer and not a lot else.  Let nobody fool themselves that we would have heard of the lovely Coleen had she not hooked up with the distinctly un-lovely Wayne at an early age.
Isn’t it also staggering how many people are prepared to trample all over their principles (assuming they had some to start with) once a few pound notes hove into view?  Wayne has allegedly told his wife’s family that most of what they now enjoy (a large house, a lavish lifestyle and vicarious fame) is due to him.  This may well be true but it’s hardly gracious, is it Waynio?  His wife’s family are said to have been the guiding force in ensuring they stayed in the North West and rejected even more lucrative offers from the likes of Chelsea and Real Madrid, both of which were apparently interested in securing the talents of Mr Rooney.  Ironically, it looks as though those talents are currently on the wane (pun entirely intended).
It would have been an interesting scenario, had Manchester City managed to interest Wayne in joining them.  Had he been foolish enough to even consider this move, he would undoubtedly have been putting his own, his wife’s and even his baby son’s lives in considerable danger.  You may think this is a dramatic over exaggeration but that would be to underestimate the fervour of the average Man U fan.  To them, this would have been a betrayal of the highest order and it is said that the authorities took seriously the graffiti found scrawled across a Nike poster which read “Join City and you’re dead”.
I can only hope that this disgraceful episode which casts Alex Ferguson and the Manchester United Board in just as poor a light as Rooney, enables the general populace to wake up to the fact that greed is not good.  There are hints that, despite their fanaticism, the fans are beginning to tire of Rooney who seems to be all mouth and no trousers at present.  Banners reading “Who’s the whore now?”   have been on show at matches and a large mob went round to his house to “have a word” when this whole fiasco first erupted. 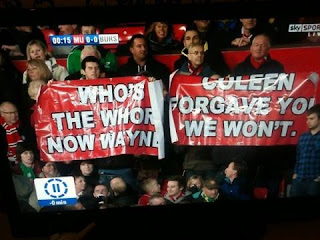 Rooney has admitted that it may take a while to regain the trust of the fans – those fans to whom he signally failed to apologise once the new deal was done.  Well one way might be for him to make substantial donations from his new salary to say, his local hospital which is no doubt under severe stress from the current spending cuts – that might be a start.
But despite all this, there will be those who continue to idolise him.  So the message seems to be this:-  Disrespect your wife, your family, your team,your fans and your boss.  Obtain a super-injuction to prevent repellent details of your repulsive behaviour emerging.  However, ensure that multiple press leaks 'just happen' and that you are photographed shopping for toys for your baby son in an entirely cynical attempt to manipulate the press and the truth. Then effect a rapid U turn and smooch up to the Manager you defied at a photo call.
I have been to Old Trafford twice.  Both times TS and I were given tickets by a friend for the “posh seats”.  There is nothing quite like it – as a nominal Man U fan (where I grew up in the North West, everyone supported Man U and anyway, I fancied George Best) there is nothing quite like the atmosphere they generate – they really go for it – guards of honour as the players run onto the pitch, sonorous announcements such as “Welcome to the Theatre of DREAMS” all of which is greeted by 75,000 people yelling their heads off...it was amazing and I’d go back tomorrow.  However, to get back to my point, there we were, me and TS who was aged 10 at the time.  Man U were playing Chelsea and someone in our posh bit made the mistake of cheering Chelsea on at one point, little realising we were seated next to the diehard fanatics of the Stretford End.  As one body, the whole lot turned round, pointing their forefingers aggressively and chanted “FUCKING CHELSEA RENT BOY, FUCKING CHELSEA RENT BOY!”  in our general direction.  I didn’t know whether to be upset that TS had heard this rant or that he didn’t ask me what a Rent Boy was....!
Posted by Curry Queen at 12:56 No comments:

I've come home from work.  The Shah is at home (unusually).  He is opening the accumulated post that has been gathering dust in the hall for ever.


And shouting at it.


A Building Society statement?  'Bastards!'  A renewal of his subscription to The Economist?  'Fuckrrs!'  Two identical letters from Her Majesty's Revenue & Customs?  '*&^%£$@*!'


There is also the biggest television I have ever seen in my life sitting on the kitchen floor.  What looks like a stand for said TV is beside it.  It is clearly not a new TV - it is a bit dusty.  WTF?


I follow the sound of cursing and come upon the Shah, red-faced and harrumphing.  He waves some sort of bill at me and, all of a sudden, his facial expression changes to one of an idiot savant.  He offers me a toothy smile and whines "Secretary?" with a ghastly, ingratiating smirk across his chops.  I make a dash out of the room before I can be trapped into this nightmare.  I mean WTF x 2?  Does he now expect me to deal with all his mail like a feckin' Secretary while he is cutting a swathe through the Midlands all week?  Er, yes he does.  As if.


A little later, I ask about the TV.  "Oh yes, that!" he says as if it is something of such minuscule consequence that he had quite forgotten all about it.  Adrian's moving house and he doesn't want it, so he's given it to us."


This is undoubtedly a generous gesture.  However, I'm sure there are certain Health & Safety recommendations regarding how far away you should sit from monster tellies and, in Crap Cottage, I think we may end up having to sit in the garden just to view the damn thing safely.


Needless to say, TD is delighted, declares the whole thing "sick" and demands that the Shah give up shouting at the mail and set it up for her.  This he does with some alacrity because he too is v. excited by giant tellies as only a boy can be.  It is massive - 50".  Mind you, even I have to admit that the picture is amazing (HD or some other term I have no comprehension of) but that Sue Barker's wrinkles are much worse than I thought.  We sit and watch a programme on ancient buildings or something similar for a while.  This allows the Shah to indulge his passion for Malapropisms.


A shot of an ornate coffin fills the screen.  "Oh look," says the Shah with great excitement.  "There's an oesophagus..."

We've done it!  We have finally disgorged our first born, chucked him out of the nest and palmed him off on an unsuspecting University.