Just in case you get bored...

Just in case you find yourselves at a loose end waiting for the chimes of midnight to strike tonight, have a look at this  - 100 things we didn't know this time last year, courtesy of the BBC.


Meanwhile, rather than conduct a tedious review of the year, I am going to opt for brevity and simply share with you what, for me, was the quote of 2011.  Did it come from a statesman with gravitas?  No, Nick Clegg was too busy to answer my request for a quote. Did it come from an international sportsman? No.  Did it come from a leading patron of the Arts?  Well sort of.  It actually came from acclaimed piss artist the Shah and it was as follows:-

"To you, I'm just a human piñata, aren't I?"
This made me laugh so much that the wine I was drinking at the time came out of my nose. (Just thought I would share that with you).
You will notice that I have included a link to help out those of you who are not familiar with the ancient Anglo Saxon term "Piss artist".  This was an insult that was popular in my youth but which has largely fallen out of use these days.  I couldn't think of a more appropriate term to describe my beloved as it happens.  Indeed, it has fallen so far out of use that most of the definitions I found for it were absolute nonsense - like this from Urban Dictionary:- " Someone who has no control over his penis" The mind boggles!
Here's wishing all those kind people who took the time to read my blog over the past year a very happy and healthy 2012!

Okay.  So it is the morning after the Ice Bar incident and I have woken up with a banging head and a mouth like a Turkish wrestler’s jockstrap.  Shabby is not the word.  It’s okay though, because as I lie comatose on the bed wondering how long it is going to take me to get upright, my head is swimming so much, I remember that it is Friday and I am still on holiday!  Huzzah!  Then I remember that it is the last day before the Shah starts his new job and that he too has the day off and we are due to spend it together....oh God.
Yes, we have promised each other that we will go up to town (again – hurray.  Not.) and spend a happy day in each other’s company.  I could wimp out and spend the day in bed, sipping tea until I feel human again, but this day out was the Shah’s idea and those ideas are, let me tell you, like hen’s teeth.
So I stagger out of bed and lurch around a bit, feeling totally dreadful but pretending to be FINE.  We get the train up to Waterloo and I can go no further.  My head is swimming, my stomach is rumbling and I know that the only thing that is going to get me through the day is a large, greasy meal.  Ideally, we are talking a full English but, in the absence of bacon and eggs on the concourse, we settle for Burger King.  Never has anything so vile tasted so good and hit the spot in quite the same way.  2 minutes after finishing it, I am a woman transformed!  We head to the taxi rank (well I wasn’t transformed quite enough to consider endless Tube journeys...have a heart.)
First stop was Tate Modern.  Just so’s you understand, any outing that involves both of us, has to be very democratically arranged because our interests are so totally and utterly divergent.  The Shah avoids matters cultural like the plague.  His interests are basically technology and sport, both of which send me into a stupor.  So, in order to keep us both happy, we have agreed to a gallery, a film and a curry.
So, like I said – here we are at Tate Modern.  I absolutely love it – there’s always something interesting going on – loads of different things on offer – The WeatherProject installation by Olafur Eliasson in 2004 was stunning and I could have stayed there for hours just watching it.  The Shah pronounced it to be shite.  What a surprise.  According to him, anyone could have bought a yellow light bulb and bunged it into the Turbine Hall.  As if.  However, the good thing about dragging him around such a place is the monologue he keeps up all the way round.  In his defence this time, I have to say that quite a few of the exhibits we saw were um, inexplicable and (whisper it if I dare) *crap*.
Here are a few examples.  It’s not the exhibits themselves per se, it’s more the explanation that sits on the wall beside them explaining their meaning, or attempting to:-
The Shah meandered from room to room becoming more exasperated by the "Art" on show with every footstep.  The sighing grew louder, the cries of "what the actual f...?" came more often.  He declared himself a mug because, if only he had thought of banging a few dozen nails into a piece of wood and painting the whole lot white like this... 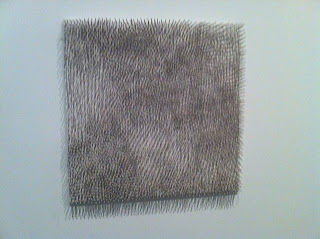 and calling it 'White Field' he could have made a mint.
Here is a particular favourite called 'Some broken sticks adorned with fluff.' 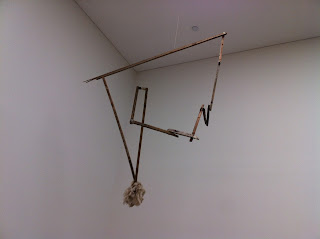 But this one really stole the show...
The explanation on the wall next to this gave its name as 8th Paper Octagonal 1970 by someone called Richard Tuttle.  I am not familiar with Mr Tuttle's work but apparently he makes a habit of cutting wonky paper shapes and sticking them on walls.  Indeed, the blurb informed us that "...the Octagonals are paper shapes that he cut from a template and glued to the wall..." just like in playschool, you mean?  Apparently, "the orientation of the shape can vary from one installation to the next."  Which roughly translates as "sometimes he sticks them upside down".  Also "as an object, it is paper thin but still takes up an awkward place between painting and sculpture."  Oh really?  So it's not just covering an awkward water mark on the wall then?  You do surprise me.

The Shah rumbled on. I decided it may be time to leave - via the shop, of course as this allows him yet more grounds for huffing and puffing over the inflated prices charged and give him immense satisfaction in the process.
Later on, over a well-deserved curry at Masala Zone, we fell to discussing cultural differences after I had to spend 10 minutes convincing a sceptical waitress that, yes I did like my food spicy and that, if she brought me some pap like Chicken Tikka Masala, I was likely to stick her with a fork.  The Shah wondered if he would be treated differently if he changed his name to an Irish one.  I suggested he give Phil O'Stine a try.
Posted by Curry Queen at 00:09 16 comments:

Through a glass darkly...

...or Cider with Rosé.
I realise my blogging has been pretty lax of late and I have kept going with the odd cartoon or photo nicked from someone else.  It’s not that there’s been nothing to write about – far from it – there’s been SO much going on that I just haven’t had time to put fingertip to keyboard for ages and then I’m so knackered by daily life that I’m generally falling asleep on the sofa by 9pm which doesn’t help either.
Anyway – I’m going back to half term and a ‘works outing’ (I love that phrase).  Some bright spark (you SMH!) thought it would be a great idea to go to the Ice Bar in London.  For the uninitiated, this is um, a bar made of ice. 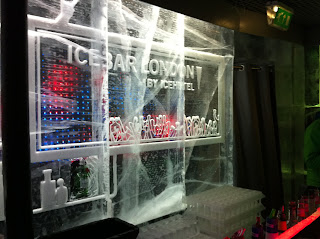 You book a time slot (you only get 40 mins or so) and some nice boys chuck a huge cape over your head which has padded gloves on strings hanging through the arms – just like your first day at Primary School (well okay then – my  first day at Primary School).  Once inside, the price of entry includes a free cocktail which gets served in a shot glass made or er, ice, natch.  It looks like this...
So what could possibly go wrong?  Nothing – as long as you follow these rules:-

It was a fantastic night – one of those that will live on in the memory despite the shocking hangover the next day...more of which later.
Posted by Curry Queen at 11:47 16 comments:

The next best thing...

Although I failed to find "Bah Humbug" in neon lights, I did come across these in Sainsbury's... 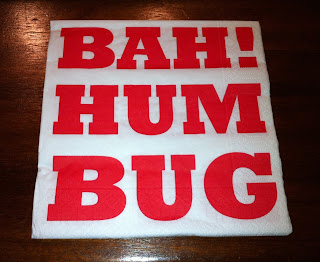 Charles Dickens must be spinning in his sepulchre...
Posted by Curry Queen at 16:54 14 comments: