Scenes from a family...

It’s that time of year when we are like ships in the night as we all head off to our various Christmas parties and office outings and collide only in the rush for the bathroom the following morning, pink eyed and wild haired.

So has it been this week and, now that the son also has a proper grown up job and commutes up to London every day, and daughter is home from Uni and has basically turned feral, it’s even worse.  Like this:-

Scene 1
The kitchen of Crap Cottage.  The Shah and I are battling for access to the milk in the fridge.  The Shah has not got bags under his eyes so much as feckin’ great Louis Vuitton trunks.  He has wisely obeyed the law which states “He who drinks and snores, sleeps in the spare room”.

Moi: So what time did you get home last night?
Shah:  Er, (looks shifty) about 1?  (This is known as ‘testing the water’.  The Shah regards questions like this as tricks designed to catch him out.  Which they often are.)
Moi:  Hmmmm, where did you go?  I’ve forgotten.
Shah: A Lebanese restaurant off Wigmore Street.
Moi:  Did you have a good time?
Shah: (enthusiastically)  Yep, great.  I danced with the belly dancers!
Moi:  Oh my God...
Shah:  And someone grabbed my phone and took pictures!
Moi:  FFS. 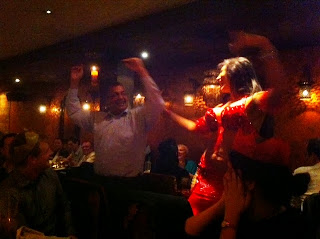 And here, chums, is the photographic evidence of which he spoke. Note the wide-ass grin on the mush of the Shah.  Note the woman in the foreground holding her face in horror.  Nuff said.

Scene 2
Our bedroom in Crap Cottage.  It is early one morning.  The Shah has once again been out until all hours the night before and once again obeyed the spare room law.  Marital relations are cordial.

Scene 3
It is morning.  Son has been out the night before.  I know he is a big boy now but there still exists the rule that he has to text if he intends to stay out all night, otherwise I fret.  I’m his mother, it’s my job.  Anyway, son’s bedroom is empty at 7am which disturbs me and leads to the following exchange of texts:-

Me:  Please reply when you get this to let me know you are okay.  Very unimpressed....

Son: Sorry. Was on the first train home at 5am but fell asleep.  Just woke up and now I am in Havant*.  I’m having to get the train back.

It took him another two hours and an extra £16 to get home.  Not happy!

Scene 4
My mother’s flat.  I am visiting to take her shopping and out to lunch.  Mother is out to lunch in more ways than one.  I wrote earlier this year about her bad language here and, reader, things have not improved one jot.

I enter the room.  Mama does not see me as she is absorbed in trying to force her purse into her handbag, and struggling.

Scene 5
I am at work.  My phone rings and the display shows my mother’s number.  I pick it up with great trepidation just as it goes to voice mail.  I leave it a couple of minutes and call back.

Mama:  Oh it’s you!  I just tried to ring you but I got a girl’s voice saying something.  Couldn’t tell what the hell she was on about, so I hung up on her.  Silly cow.
Moi:  Yes, that was me, mum – it was my answerphone.  It was my voice you heard.
Mama: (shocked)  It didn’t sound a bit like you!
Moi:  Oh well, never mind – what can I do for you?
Mama: (in tones of drama)  I’ve got no electricity!
Moi:  Oh dear – what’s happened?
Mama:  The lamp won’t turn on!
Moi:  Hmmmmm, Try the light switch on the wall.
Mama (sighs dramatically)  Oh okay – wait a minute.

She drops the phone on a hard surface, practically deafening me and I can hear her shuffling across the room.  A distant, muffled voice shouts “fuck!”  Eventually, she returns.

And I expect there is plenty more to come...

Happy Christmas one and all and thank you for reading my blog over the past year!
CQ xx
* Havant, for the benefit of my foreign readers, is on the south coast of Britain and is over 50 miles from where we live.  Haha!
Posted by Curry Queen at 17:37 10 comments:

So here we are on the final leg of our journey.  By pure chance, we had chosen to see Jaipur last.  We arrived following a long drive from Agra, via Mathura and Vrindavan which I wrote about previously, feeling a bit jaded.  Our guide was a young guy called Sanjay who spoke the best English of all our guides and had the kind of sarcastic sense of humour that went down a treat with the Shah et moi.

Jaipur is called the pink city because, in 1876 when the Prince of Wales (later King Edward VII) toured India, the King of Jaipur ordered the city to be painted pink as it is the colour of welcome.  It is now illegal for the outsides of any building in the old city to be painted any other colour.

We had heard good things about this place before got there - various friends and contacts who had visited and lived there, raved about it and we were not disappointed.  We stayed in a small boutique hotel that had been in the owner's family for generations.  It was beautifully furnished with antiques and had the most attentive staff, bizarrely attired in military uniforms. 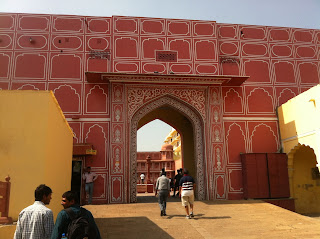 There is just something about the atmosphere of Jaipur - it was still teeming and busy but somehow just a bit less frenetic than Delhi and less tacky than Agra.  The Rajasthani people dress in such vivid colours, the wild pinks and ochres and cyans are a feast for the senses and it seems impossible to feel sad or down in the face of their cheerful disposition despite the inevitable crushing poverty. 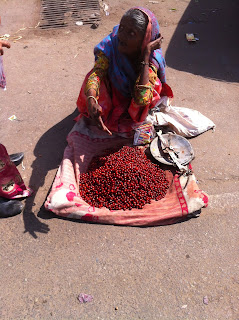 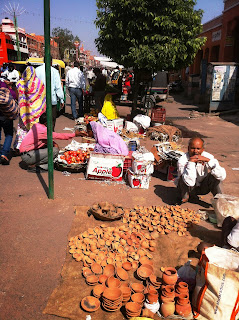 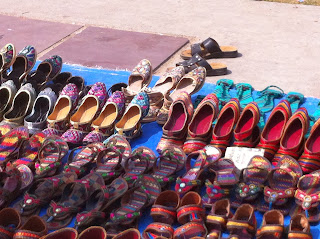 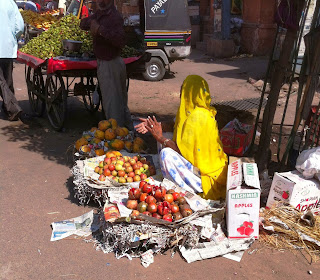