The less said the better

Only 24 hours after the announcement of the Royal pregnancy and I have already reached overload.  I guess we could all have predicted the hysteria that would accompany such a reveal – The Sun's ever-punning headline writers have outdone themselves this morning – and the world’s press is camped outside the King Edward VII Hospital for Officers (to give it its full title) in London’s Marylebone.  You would think (hope) that in the wake of the recent debacle over phone hacking by the UK press and it being demonstrated to be a bunch of sharks, rotters and scum-sucking bottom feeders, it might have collectively decided that the less said the better.  But no. 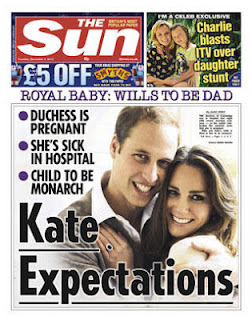 You have to feel for Kate.  Not only is she feeling like crap as most do in their first trimester, she is having to contend with the incessant, uncontrollable vomiting that is hyperemesis gravidarum and do the whole thing in the public eye.  So while she is talking to God on the great white telephone, the rest of the world is obsessing over whether, if it is a girl, will they call it Elizabeth or GOD FORBID – DIANA!!  Actually, what a hoot if it did turn out to be a girl and they do call her Diana and she takes after Uncle Harry and shags her way round the world, getting herself photographed naked on a throne or two whilst puffing on some suspiciously home-made looking cigarettes….  But please God, don’t tell me we are now in for 9 whole feckin’ months of Kate ‘n Wills baby fever.  Let it be twins, I beg you.  Then at least she’s had an heir and a spare and can safely relax and none of us has to go through the whole horrible experience twice.

So all of this and Kate finds herself in the Royal Family’s hospital of choice when I am damn sure she would rather be ensconced in some swanky private clinic.  Not that King Ed VII is a hole in the ground – far from it – and I should know because I worked there for a spell during my nursing days.  I expect it may have been done up by now, but the skanky nets, still at the windows, tell another story.  There was nothing massively wrong with it – it was a good, safe place with decent nursing care but it was a bit, well, bare.  In fact, probably exactly the sort of cell-like environment enjoyed by the Royals at Balmoral or any of their other draughty castles.  I have memories of few pictures on the walls, no carpet – brown lino instead – and everything being a bit utilitarian. I expect the Windsors feel right at home there.

Mind you, that didn’t seem to stop the great and the good from queuing up to be admitted.  During my time, I looked after the grandfather of a famous journalist, a film director and the odd model or two (usually having their wisdom teeth out to enhance their gaunt faces) amongst others.  Princess Margaret was admitted while I was there, but not on my floor.  I heard via the grapevine that she was very nice but quite demanding.  Didn’t like the hospital food and kept sending out for chopped liver sandwiches.  Bleurgh!

Princess Michael of Kent was also admitted whilst I was there.  She was on my floor.  And the less said about her, the better!