You are what you eat

I like cooking.  Cooking runs in my family - we all cook, even the men well, especially the men.  My dad was an excellent, inventive and instinctive cook and we were brought up on an exotic diet that left many of our friends open-mouthed - not always with envy.  Living out in the country, we were often presented with game and it wasn't unusual to have Pheasant for Sunday lunch or to come home to find my dad with with a large Hare hanging from a hook in the kitchen, being casually disembowelled.  Funnily enough I would never choose to eat game these days.  I think I had enough of almost breaking teeth on bits of shot during my childhood to last me forever.

One of the reasons I like cooking is that I like eating. I come from a generation to which waste was an anathema and if you didn't like what was on your plate there was no alternative.  If you weren't Brussels Sprouts hungry, you weren't hungry at all.  There was none of today's endless snacking - you ate what you were given and were expected to be bloody grateful for it.  Leftovers went into a bowl and into the fridge and were only thrown out when their coat of blue-green penicillin rendered them unrecognisable. (My ma still holds to this maxim today, worryingly.)  My (ungrateful) children have commented on my efforts here if you can be bothered to read it.

And I do like a good food blog: David Lebovitz and Pamela Timms' Eat and Dust are just two of those that I follow and read whenever I have time and they're both fabulous.  There are also some real horrors out there in the blogosphere though.  Take this for example - this is a picture that I unashamedly stole from somewhere ages ago - so long that I can't even remember and own up - sorry!  But how appetising does this look for a food blogger? 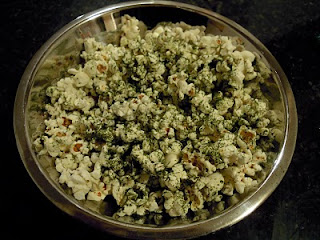 I have absolutely no fucking idea what on earth this can be but I find that I saved it with the file name of vom.jpg which just about says it all.

Alternatively, I know exactly what these little cupcakes are meant to be:-
I just love the drips of 'blood'.  I have a life-sized brain mould in which I made pink jelly one day, and rendered it opaque by adding some Carnation Milk (remember that?)  I thought the children would be hugely entertained but they were utterly repulsed and most of it went in the bin.  I think the brain is in the garage somewhere now.  No sense of humour, some people.

Anyway, throughout my deprived childhood, I don't remember anyone being fat particularly.  These days, it is quite a different story.  Obesity has been in the news this week with pressure coming from some lardarses POETs (People of Enhanced Tumescence) to eradicate the word "Obese" from the English language on the grounds that it makes them feel unhappy and victimised.  Aah woogums.  Here's a diet tip for all you fat bastards deliciously curvy souls out there:  Eat less, move more. That's about the crux of it.  You can then ditch all the medication, the fat blockers, the appetite suppressants, the gastric bands etc and we will no longer have our teeth set on edge by the sound of your wobbly thighs rubbing together.  I'm not saying that, as a family, we're stoutist or anything but the Shah has been known to stalk the grossly obese at airports, trying to get a glimpse of their boarding card for their flight and seat number, hoping against hope that they won't be sitting next to him.

And, of course, they say that you are what you eat.  This is supposed to be a truism but it's strikes me as strange because I don't recall eating a bitter old trout.
Posted by Curry Queen at 20:49