The definition of madness

The definition of madness is said to be repeating the same error but not learning from the experience.

If that is so, I am the maddest of the mad.
You would have thought I would have learnt my lesson when it comes to socialising with colleagues after this experience, but no.
Last week, we decided to go out to celebrate a significant birthday for one of our number.  Not a huge deal – meet up for a drink and then have a meal at a local Italian Restaurant we had been to before.  And all went according to plan.  Most people were driving so there were no drunken shenanigans, the like of which were seen at the Ice Bar.  In fact it was a pleasant, if pretty tame, night all in all.
Until we got to the pudding.
Like the drinkers, the pudding eaters were in the minority.  And it always seems to go that if someone has food and the people around them don’t, it is de rigueur for the non-eaters to stare avidly at the eater’s food in lust and envy.
And so it was with L’s pudding.  She is pregnant, so she can afford to have the occasional treat.  She ordered the banana crepe with homemade ice cream.
And this treat (as we pointed out to her) could only be a timely reminder of what caused her situation in the first place... 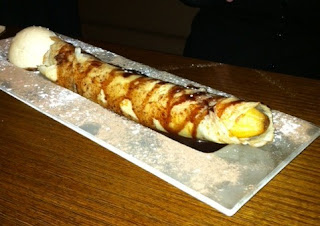 Even worse head on (if you pardon the expression) 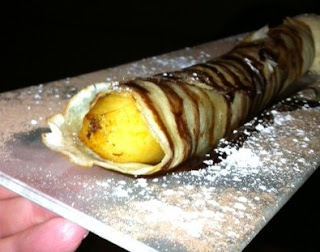 The Italian chefs took a while to realise what we were cackling at.  and looked duly disgusted.  Oops....
Posted by Curry Queen at 17:08

Email ThisBlogThis!Share to TwitterShare to FacebookShare to Pinterest
Labels: Bananas