On Saturday morning, I despatched the Shah to buy some logs.  Autumn is setting in and I would rather run out of food than run out of logs.  When he returned, I thought I would make myself useful and help him to stack them in the porch where they dry out slightly, ready for use.  I stuck the keys in the front door because it always slams when we are out front and the likelihood of getting a teenager to raise its carcass and drag itself to open a door for you is ...well, you can imagine what it is.
Here is my lovely log-pile – partially constructed. 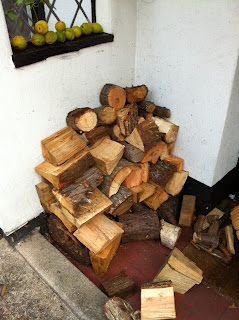 This log-pile, despite its great beauteousness, caused the Shah to adopt his WTF? face and speak to me as if I were some sort of idiot savant who deserved a good pat on the head and 5 out of 10 for trying hard.  He promptly deconstructed the pile and built it up again, lecturing me all the while about angles of slippage or some such bollocks.  Of course, I hardly found this irritating at all and there was very little bickering and name calling while the general public strolled by our front garden, regarding us with a collective quizzical expression.
After a while I left him to it as I couldn’t stand the alternate sighing at my efforts and smirking as he lectured me on basic Physics and stamped off indoors to sit down with a cup of coffee and the papers slog round the supermarket.
Here is a picture of the Shah’s super-duper 10/10 all-star medal-winning log pile. 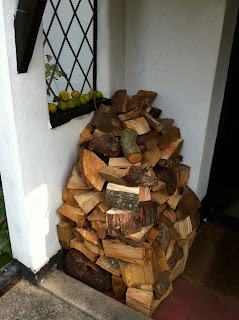 Meh.
So far, so what?
Let us fast forward to Sunday afternoon.  In the intervening hours, all four of us were out on Saturday night, at least three of us not returning until the early hours and one not returning at all (this is relevant, I promise).  At around 4pm on Sunday the doorbell rings.  World War 4 then breaks out as nobody can find their feckin’ door keys.  The Shah’s are not in their usual place, mine are in my handbag upstairs etc etc.  Eventually, and after a lot of argument, some keys are located and I open the door to find one of those blokes standing patiently there with his crate of sponges, dishcloths etc in his arms and his script at the ready.
I know full well that my face has fallen as I saw him and I have adopted an expression that basically says ‘FFS – not more money?  Don’t you realise, matey, that I have just haemorrhaged cash this week already?’ So the conversation goes a bit like this:-
Me (hoping to cut to the chase):  I’ll have one of those dishcloths (now bugger off and leave me alone so I can catch up on last night’s X-Factor)
Him (determined to spout his script): Hello! My name’s Tony and I’m pretending to be a reformed character after several spells inside but am, in reality, just here to fleece you by charging megabucks for utter tat whilst carefully casing the joint...
Me: Yep, lovely Tony.  Now can I have one of those dishcloths or wot?
Tony: Er, yeah.  Like I was saying, my name’s Tony and I’m..
Me (unable to disguise irritation any longer): I’LL TAKE A DISHCLOTH
Tony: My name’s Tony ...
Me: Gaaaah (flecks of foam gather at corners of mouth)....
Tony (delivers killer blow): Oh, by the way missus, you left your door keys in the door.....(hands over bunch of keys to EVERY EXTERNAL DOOR IN THE HOUSE).
Me: Argh.  Er, Tony – thanks so much for your honesty – I’ll take one of everything...
World War 5 then ensues as the Shah and I argue bitterly over whose fault it was that the keys were left in the door not only while we were out carousing but also overnight and that fact has necessitated me spending the GDP of a small African nation to buy Tony off.  He blames me for putting them in the door in the first place and I blame him for being the last one through the door – in fact he must have used the feckin’ keys to let himself in so the moral high ground is surely mine.  Don’t you think?
Posted by Curry Queen at 07:08