Time to refer back to the activities of the dimmest cat in the western world.

There was a time in the life of Boy George when he adopted the habit of wearing heavy, theatrical makeup with a thick, dark stripe across his neck and under his chin.  I think it was meant to...well, I’m not entirely sure what it was meant to achieve, but hey, it’s a free world and all that.
It was never a look that I went for particularly but then sporting it in my world would lead to instant sectioning under the Mental Health Act.  No such worries for Paddy, oh no.  Never really at the cutting edge of fashion, he is still a few years behind the times and has only just caught up with BG’s 90’s phase.  At least that is the only reason why I can imagine he came home last night with a thick, symmetrical black stripe under his chin.
At first we thought he was going for the designer stubble look – more George Michael than Boy George, but then we weren’t so sure. (This reminds me of a story about my brother, whose name is Michael and who was on a train, and two teenage girls obviously decided to wind him up.  “Hey, aren’t you George Michael?” asked one of them.  “No,” replies my bro, who has the quirkiest sense of humour you are ever likely to find “I’m his brother, Michael Michael.”  This completely stumped them and they slunk away, all attempts at smart-alec wind ups abandoned.)  Not sure why I told you that, so let’s get back to the cat stuff.
So have a look and see what you think.  I would just like to point out that, in the interests of entertaining my readers, I had to spend a good portion of yesterday evening coaxing a reluctant and, frankly, disinterested, cat into posing with his chin in the air.  Imagine my success!  Eventually, TD had to wrestle him into cooperation. 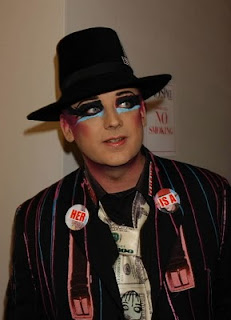 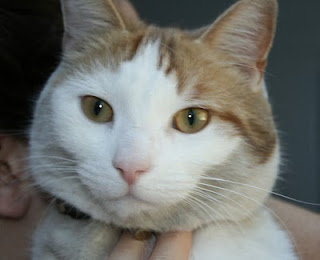 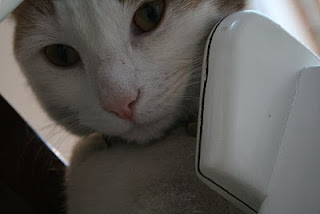 After that, he wisely hid on a chair but still had a sneaking interest in the camera

I've no idea how he came to be so filthy.  All I can say is that, if he is going for a new look every so often, I can't wait for the George Clooney  version...
Posted by Curry Queen at 06:32