Leaving the flat plains of Delhi behind, we next journeyed towards Agra with the goal (of course!) of visiting the Taj Mahal.  We had been warned that the one and only thing worth seeing there was the Taj - or as a friend succinctly put it, "Agra's a bit of a shithole, really". Consequently, we decided not to stay in Agra, but instead to rough it here in the gorgeous Laxmi Vilas Palace hotel.


Here are some photos just to make you sick.  It was cheap as chips too.... 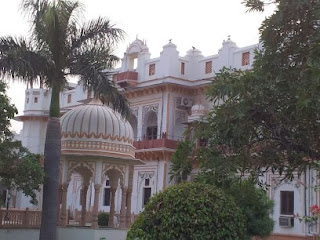 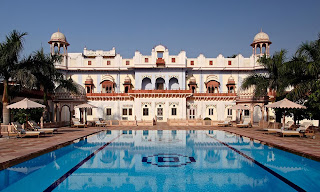 However, we don't believe in doing things the easy way and, en route, the Shah decided he wanted to stop at a place called Vrindavan in Uttar Pradesh which is supposed to be the repository of family records as well as being the birthplace of Krishna and thus, very holy.

So there we are, bowling along the dusty road towards our destination - actually with no bleedin' idea at all of where we were going - we just trusted the driver with our lives - when said driver pulls into the side of the road.  In the middle of nowhere.

There was a little old bloke standing there who just hops into the passenger seat and starts chatting away to the driver in rapid-fire Hindi.  Eventually, the driver jerks a thumb at the new guy and says the word "guide".  Oh, okay then.

Shortly afterwards we were dropped off and told that the driver would meet us back in the same place a couple of hours later.  A couple of hours?  Let me tell you, we were well off the beaten track.  It was hot, it was humid, it was foetid. And one other thing.  While we never had a language problem in India, there was definitely an accent problem.  This little old guy closely resembled Popeye and had fewer teeth.  Well, actually none.  I caught about one word in 20. The Shah did slightly better by virtue of babbling in a mixture of native dialects but jeez, it was hard work.  First stop was the Govinda Dev Temple just up a side street.

Built in 1590, it was an impressive sight but the guide told us that the top four storeys had been lopped off it during some unrest centuries previously. To reach it, we walked up a steep hill, the Shah hissing at me to mind where I stepped.  Open sewers ran down either side of the street and I am quite serious when I say that I can no longer look a pork chop in the eye having watched the wild pigs snacking on the sewer contents.  Yup, really.

Naturally we were asked to remove our shoes before entering.  Today, the temple is deserted by all except someone to guard your footwear against the only other residents - hundreds of monkeys. I was wearing new shoes that day and it was an utter joy to wade barefoot, ankle deep in monkey piss, then to put my nice new sabots back on...

So - on to the Taj.  this was actually the following day because we had decided to see it at dawn - highly recommended and second only to seeing it at the full moon, apparently.  A 4.30a.m. start *groan* meant we were well on the road to Agra by 5a.m. and reached the Taj by 6a.m. when the gates opened.

I have no adequate words to describe the eerie, ethereal beauty of the Taj Mahal looming out of the mist in the chill of the early morning.
This the first sight you get:- 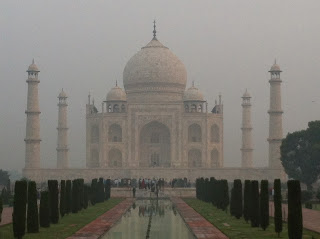 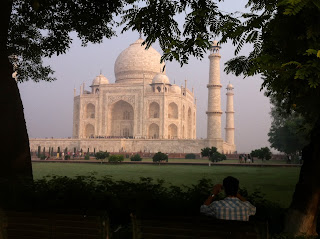 It is the most extraordinary place as long as you can ignore all the fat-bottomed tourists vying for a place on the bench in order to have their "Diana" shot.  Quite, quite beautiful and an astonishing piece of architecture and technical wizardry.

Unfortunately, I stood in some camel shit on the way out whilst trying to dodge yet another of the ubiquitous monkeys.  But there you go.  If there's one thing we learned in India, it's that you have to be able to take the rough with the smooth!

Last word from the Taj.  Whatever you do, do not put your leg in the Wazoo Tank.... 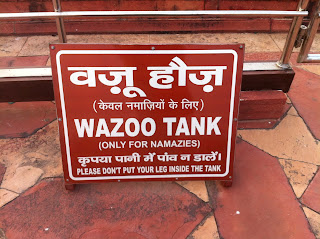