Regular readers will already know that the Shah has, for some months, been working in Kuwait - from where he is allowed home for a measly two and a half days per fortnight.  He's just been home for the weekend and was mightily huffy to discover that life goes on and I needed him to chop some wood and do a few blue jobs, not lie about arse-resting all day, watching the Ryder Cup and alternately cheering and swearing.

He also had to do his expenses and that led to more cursing about the expense of life in the land of sand, although petrol is an astonishing 8p per gallon or thereabouts.  YES!  you read that right 8p per feckin' gallon!  After all, they just dig it out of the ground and bung it in the cars, pretty much.

So we got to discussing our financial situation and how we could improve it.  It was a fairly short conversation.  And it did nothing at all, nix, nada to improve the Shah's mood.

Then I had a brainwave! 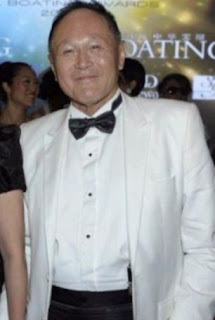 Mr Chao is a Chinese billionaire of rampant heterosexuality.  So rampant that he claims to have slept with 10,000 women.  A fact which just goes to prove that love is regularly tripped up by its guide dog.  Mr Chao and his over-active trouser snake have taken exception to his daughter's lesbianism and her recent marriage to her long-term girlfriend.  In fact, he is so incensed that he has offered a reward of some £40million to the man who can seduce her and "turn" her.  Oh and he'd quite like a male heir as well, if that could be slotted in, if you'll pardon the expression.

"There you go, Shah" I announced.  "It's the answer to all our problems and every man's dream, surely - turning a lezzer?"  The Shah looks vaguely interested but somewhat suspicious of my motives at the same time.
"Look," I continued, "it says here ‘I don’t mind whether he is rich or poor – the important thing is that he is generous and kind-hearted,’ - you can always pretend that bit," I added helpfully.  The Shah narrowed his eyes.

"Take one for the team!" I implored.  "There's 40 million smackers at stake here - are you a man or a louse?   Anyway, you'd better get on with it because apparently offers are pouring in from all over the globe. And it might be nice if you could have a shave first."  The Shah treated my idea with the contempt it deserved and stamped off upstairs to pack his case for the return journey.

The funny thing is that, when I dropped him at Terminal 5 last night, I could have sworn he headed off in the direction of the Hong Kong desk...