No, not letters or digits - I mean real live (and some dead) characters. There are millions of them in New York, much as there are in any big city but somehow, in Noo Yoik, they seem to have that little bit more chutzpah  than anywhere else.

One notable New York character was
who was a renowned wit, poet, writer and depressive.  She formed part of the famed Round Table at the Algonquin Hotel in New York from the summer of 1919 until its demise in the late 1920s/early 1930s.  The Round Table - which also called itself 'The Vicious Circle' for a while (a name I much prefer) was formed of a fairly fluid group of authors, columnists, poets and actors and as well as Parker, the group included at any time (amongst many others) Robert Benchley,
and

although he probably didn't have a lot to say for himself.

Parker wrote articles, short stories, plays and poetry.  One poem which may well reflect her suicidal tendencies and frequent depressions is called 'You Might As Well Live' and goes like this:-

She was equally well known for her witty one-liners - for example when reviewing a performance by the actress Katherine Hepburn, Parker commented acidly that "she runs the gamut of emotions from A to B." Other sayings of hers are "Take care of the luxuries and the necessities will take care of themselves" and "If you want to know what God thinks of money, just look at the people he gave it to. (I couldn't agree more with both of those!)

Anyway, the point of all this is that I have a cousin who has married an American and now lives in New York State with her family. Unfortunately, on this trip, we only had time to meet up for Brunch one Sunday but she said on the phone that she would book somewhere and where would we like to go?  Maybe somewhere typically New York? Sounds good, I said and was thrilled to find ourselves, a couple of days later, sitting at a table at the site of the actual Round Table in the Algonquin Hotel (sadly the original is long gone).  I would like to think my conversation was up to the sparkling repartee of those long-dead New York characters but, sadly, I know my limitations.  I know my cousin reads my blog - so thank you again K - it was an inspired idea to take us there!

And you don't get away without a couple of (slightly out of focus) photos of the place of worship...
Of course, there are probably still literary salons, overflowing with intelligentsia and oddballs  in existence in the Big Apple.  Unfortunately, we didn't find any.  What we did find, however, was a couple of characters who called themselves the Naked Cowboy and the Naked Cowgirl.  This pair of lovelies hung out in Times Square (where else?) and seemed to make their living by getting punters to give them money for photo ops.


I had to sneak a photo of the Cowboy from behind because I was mightily a-feared of a wardrobe malfunction, given that he was wearing just a pair of flimsy budgie-smugglers... 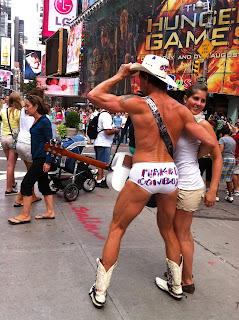 His oppo was even more gorgeous...ahem...


I have to admit that I sneaked both these snaps without paying.  I got the Cowgirl just after a punter had given her the dollar bills that are shoved down her (substantial) cleavage.  There followed this conversation:-

She was a sight to behold.  Clearly she had taken to heart of one of Dorothy Parker's more famous aphorisms - "Brevity is the soul of lingerie".
Posted by Curry Queen at 19:49