We have a slight plumbing problem at Crap Cottage.  Needless to say, it can’t possibly be simple – a washer on a tap, a blocked drain....no, it has to be the old dripping cistern lark.

We’ve had this issue before.   Something goes wrong with the loo, the cistern overfills and the overflow runs incessantly, keeping me awake (the Shah would snore through a nuclear blast) and making me even worse tempered than usual.  Last time it happened, the Shah fiddled with all the component parts of the whole plumbing system of the house,  broke pretty much everything he touched, swore blind it was all fine and I ended up calling a plumber to fix it all at vast cost.
This time, the Shah swears blind he has learnt his lesson from last time and, besides, he has picked up loads of tips from Mark and Paul – the unfortunate builders who did our kitchen extension and who are still in a Swiss Clinic recuperating.  So the Shah begins to investigate the problem.  He begins by “adjusting” the mechanism inside the cistern and assuring me that it is all fixed and the water is no longer dripping.  The actual result is that the water flow is increased and the accompanying burbling sound through the pipes not only keeps me awake but also makes me need a wee every five minutes through the night.  It is like Chinese Water Torture. 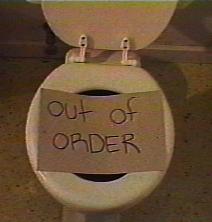 The Shah then forms the opinion that it is the tank that is at fault and the ball- cock needs replacing.  I remark sourly that the tank is not the only thing that will need its ball-cock replacing if this isn’t sorted soon.  The Shah affects indifference and adopts the superior air of the true artisan.
So now he needs to get into the loft to look at the water tank.   Correction – he needs to get into one of the two lofts to inspect one of the FOUR water tanks that nestle up there.  This is Crap Cottage after all – the land where nothing is ever straightforward.  The two lofts are both tiny and only good for storing the odd suitcase.  They are probably tiny because of the ridiculous over supply of water tanks.  I have no idea what they do, so I ask the Shah.
“Shah,” I say, “how come we have four water tanks?” The Shah’s air of Artisanship (sp?) increases and he says airily “because we need water for the house,” (as if I am an idiot savant).
“I know that,” I say gritting my teeth, “but why FOUR?”
“Well it’s obvious, isn't it?” he huffs
“er, no?”
“Well,” he continues in his best patronising voice, ”this one here is the cold water tank and that one there is beside it.  As for the two in the other loft, the little one is the hot water tank.”  He gives a smirk of satisfaction at his own inspiration.
“So what’s special about the tank beside the cold water tank and what about the fourth?”
The Shah loses patience.  All of a sudden he leaps up the rungs of the step ladder like a young gazelle (as opposed to cutting the figure of an arthritic hippo which is the norm) and buries his head in the loft opening so that I can’t hear his reply.
Some time later he reappears to tell me that everything is fixed – no problem.  I ask how he has done this so quickly.  He tells me that he has changed the ball cock and it’ll be fine.”*
Fast forward 48 hours.  Jason the Plumber is here.  He is renewing a faulty part in the cistern and the dripping sound has ceased.  I write Jason a cheque for an amount of money quite out of proportion to the time and effort he has expended but, frankly, I would have paid him twice as much if it meant getting the Shah to stop fiddling with the waterworks.  Peace and quiet is restored to Crap Cottage.
Fast forward another 24 hours.  One of the children is in the shower.  Suddenly, a noise like 30 Harrier Jump Jets taking off shakes the shallow foundations of the house.  I am terrified.  I am convinced that the boiler is about to explode and blow us all to Kingdom come.  I rush to inspect it.  It is off.  The noise appears to be coming from the direction of Loft 2 – the one that houses the biggest water tank.  The tank with the new ball-cock.
It is by now apparent that the Shah has completely lost interest in the waterworks and the problems thereof.  He makes up some cock and bull story, utilising as many long words and technical-sounding terms as he can in an attempt to blind me with science.  “Ah well,” he says knowingly.  “It’s because the phlange on the basilicum base is rubbing against the carborundum arm.  Don’t worry – it’ll be fine.”*
My phone rings.  It is our next door neighbour.  “I don’t want to worry you,” he says politely, but there is a terrible grinding noise coming through the wall from your house – we wanted to make sure you were okay.”  He is polite enough not to say “and you are keeping our baby awake”.
“It’s all your fault,” I inform the Shah who pouts like a small boy.  “I can’t understand it,” he whines.  “I’ve never broken anything before.”
When I have stopped laughing and smacking him round the head, I remind him of the time, in a previous house, when the cistern began to leak.  He cemented up the area that was leaking so effectively that, not only did the leak not stop, but the Plumber could not get the offending nut undone and ended up having to take a sledgehammer to the loo and literally smash it out of the bathroom before replacing it – again at vast cost.  The Shah looks amazed.  “I don't remember that!” he cries.
I put the kettle on.  I am making tea – strong with two sugars.  Just the way Jason likes it.
I have already noted the Shah's generous use of "it'll be all right"  here which generally indicates anything but.
Posted by Curry Queen at 23:04