We have recently returned from our first visit to Canada.  You have to understand the Shah’s general aversion to holidays to appreciate quite what a stunning piece of breaking news this constitutes... This post is a bit late, but life has intervened (by which I mean A level results and the ensuing fall out which I have already bored you with), so I'm a bit out of sync.
Anyway, as it happens, the Shah has a great many relatives in Canada and we divided our time between two sets of cousins, one lot based in Toronto and  the others in Montreal.  All of them, without exception, were unbelievably hospitable and went to endless trouble to drive us around, sneak the Shah onto Golf courses he shouldn’t have been playing on, and generally show us a good time.
I think I (well all of us) had lazily assumed that Canada would simply be an extension of the States and we couldn’t have been more wrong.  It has a totally different feel.  It’s relaxed and so much calmer without all the constant gushing and jingoistic oratory so often present south of the border.  This may sound petty, but one of the most refreshing things was that nobody, I mean absolutely no-one commented on our accents.  Given that we didn’t see (or hear) one other English accent while we were there, this was an oddity.  In the States, you hear English pronunciation all the time, but they are still fascinated by it (or at least they pretend to be).  Even hardened New Yorkers have followed us around shops in a truly unsubtle manner, gawping with their mouths open every time we spoke to one another.  It became like having our very own stalkers.  And there’s only so many times you can smile and agree when someone tells you that you “talk real neat” and exhorts you to “like, say something”.
Anyway, we had a completely fab time and saw all the sights:-
Niagara Falls, 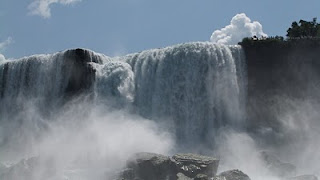 To get an idea of the scale, take a look at the tiny people top right...
Did you know you can take a boat ride out to the base of the Falls (so much better from the Canadian side) and get thoroughly drenched and deafened, not to mention awed by the sight and sound of nature’s full force?  Well, you can and it's amazing!
The CN tower.  Impressively and scarily high, complete with a glass floor for the brave to walk on – surprisingly the Shah wouldn’t be persuaded onto it – and with a revolving restaurant atop it.
Took in a baseball game cheering on the Toronto Blue Jays who won because Jose Bautista is some sort of demi god in the world of Baseball.  It was fun to go to but, to be honest, it still reminded me of a grown up game of Rounders.  The best bits were when the players chucked balls, t-shirts, gloves etc into the crowd.  Imagine the squawks from Health & Safety if we tried that here!
And we travelled a bit further afield to Montreal, where we sampled delicious Poutine.
Unfortunately, although I spent some hours trawling the net, I was unable to come up with a picture that didn’t make Poutine look like someone had yarked their cookies all over a plate.  I promise you it is a lot more delicious than it sounds (a plate of chips covered with gravy and curd cheese) or looks, er like someone has, well, y’know...
On to Quebec City 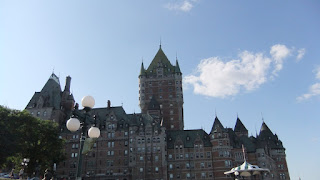 (beautiful and charming but irritatingly French) where you can buy all sorts of unusual cadeaux
and the capital, Ottawa which features a miniature Houses of Parliament accurately modelled on our own. 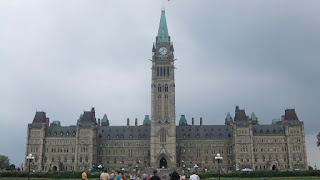 The Shah and I are firm believers in introducing our children to different cultures and enabling them to experience diverse sights, sounds, flora and fauna.  So it was heartwarming to realise that TD had, indeed, been observing the local wildlife at play in its natural habitat viz this conversation:-
“Hey mum, I saw this really cool bird this morning.  It had, like, a red quiff and blue stuff coming out of its bum...”
Mind you, the Shah and I were no better when we gasped at a black squirrel in a Toronto garden, only to be informed by our bemused hosts that the North American squirrel is, erm, black and they are about as common as our grey squirrels..doh!
Possibly only one small down side was the Canadian love of the slogan t-shirt.  Three of the worst we came across (all being worn by people in the street) were:-
“For my next trick I will require a condom and a volunteer”
“You looked better on Facebook”
And the quite gross “well, I’m no Gynaecologist but I’ll take a look...”
They make “ I'm with stupid” look positively cerebral.
That small complaint apart, we loved Canada and can’t wait to see more of it.  Although we felt we had travelled around quite a lot, when we looked on a map, we had covered about a quarter of an inch....better start saving now.
Posted by Curry Queen at 16:54

Email ThisBlogThis!Share to TwitterShare to FacebookShare to Pinterest
Labels: Canada